The Beauty of Transformation During Our Life and Death

Via Zoom or in Person 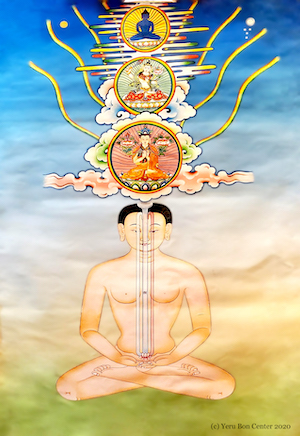 P’howa is an especially important practice in the Bon Tradition. “P’howa” literally means “Transformation.” Through the practice of P’howa, we transform the essence of our mind consciousness into the natural state of mind of Kuntu Zangpo, the Primordial Enlightened One.

P’howa is a unique method to attain the state of liberation from the cycle of karma; by forcefully cutting off the roots of suffering and Cyclic existence (in Tibet-  Khorwa), the practitioner transforms their consciousness into the higher state or ultimate state of Kuntu Zangpo, the Primordial state of enlightenment.

There are many versions of the P’howa teaching. This version is known as the P’howa of the Rainbow Circle (P’howa Jagur Ma.) This practice is aural transmission, received directly by the 21st H.H. sMenri Trizin, Sherab Gong Gyal, from Gyalwa Nam Me Chenpo (Gyalwa Nyipa Nyam Med Sherab Gyaltsen.)

This particular Phowa practice is applied by individuals, at the last stage of the dying process, when the true moment of death is experienced.

This is a powerful practice and must be learned correctly. Therefore, it is important for the practitioner to receive this Phowa practice from a qualified teacher, who has learned Phowa in the unbroken lineage of the teachings. A teacher who has not only academic knowledge but personal experience. Once you have received this teaching from such a teacher, it is important to practice and familiarize yourself well, so that it can be used at the time of death.

Once you are well trained in the practice of P’howa, you have a feeling of peace, and the confidence to fearlessly acknowledge the visions of the death and dying experience. Through practicing P’howa, we can realize that death is an inseparable part of our life.  At the same time, it will make us realize the value and essence of life.

During this retreat, Rinpoche will teach us this practice of P’howa, and how and when to apply it in practice. Rinpoche will introduce us to the process of dying, the visions that arise during the process of dying, and the stages of Bardo.  The goal is to learn how to transform or unifying inseparably the essence of our own mind consciousness with the ultimate state of Kuntu Sangpo.  This unification which means everlasting happiness and total freedom from the suffering of cyclic existence.

At the end of a Phowa retreat, Rinpoche normally performs a Kusha Ceremony.  This is called the Jag-Tsug-Ma, which means “standing blade of grass.” When you achieve the results of the P’howa practice, Rinpoche will insert a piece of blessed Kusha grass in the crown of your head, which will stand upright as proof of your accomplishment.

For this Phowa retreat, the Jag-Tsug-Ma ceremony has a different requirement.  This is optional, not required as part of the Phowa retreat, but if possible, would be beautiful to have this special Kusha blessing, as well, this signifies you have received the signs from this practice.

You can still do the Phowa retreat if you are not able to do the blessed Jag-Tug-Ma Ceremony with the Kusha Ceremony.

Rinpoche is requesting – if a student would like to complete the Phowa retreat with the Kushsa (Jag-Tsug-Ma) blessing ceremony, you will need to be a part of the 5 day retreat and then, you would need to complete a 7 day retreat practicing the Phowa. On the 7th or morning of the 8th, Rinpoche will bless the student them with the Kusha ceremony.

The reason for the additional 7 days, is to give the students more time under Rinpoche’s guidance to practice the Phowa and to see the signs of your practice, then you will be able to receive this Jag Tsug Ma blessing where he inserts the Kusha grass in the crown of your head, which wills stand upright as proof of your accomplishment.

You can participate in the Phowa retreat via zoom and then come to the Yeru Retreat Center, between January 10th – 23rd.  Your 7-day private retreat must be completed by January 23rd.  This would be a private retreat, Rinpoche will be at the Yeru Retreat Center to advise, but only for a short time each day, the rest of your time is for you to practice. You will stay in one of the cabins. The retreat center is private, you will have everything you need, so no worries about Covid contact within the Yeru Retreat center. 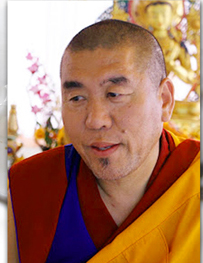 Latri Khenpo Nyima Dakpa Rinpoche’s ability to share and teach any of the Bön teachings is as captivating as it is encyclopedic.  Rinpoche has an amazing ability to engage students from beginning of any teaching and hold their attention to the end.  A charismatic being whose teaching is like poetry and believes his teachings must have the real substance of Yungdrung Bön. Rinpoche’s hope for his students is captured in a phrase he often uses:  “If the world as we know it should fall, and there are only two students who know the teachings of Bön, I want to be sure these students have learned from the pure texts of Bön. Then the 18,000 year old unbroken lineage of Yungdrung Bön will continue.”

A humble man, whose care and attention to students who truly want to learn Yungdrung Bön is selfless.

A senior  Rinpoche ordained by sMenri Monastery  in Dolanji, India, and one of the new generation of Bön Masters. Rinpoche is the lineage holder and Abbott of Latri Monastery in the Kham region of eastern Tibet.

Rinpoche received his Geshe degree (Doctorate of Bön) in 1987 from the Bön Dialectic School at sMenri Monastery in Dolanji, India. He is officially recognized as a Rinpoche by HH the late 33rd sMenri Trizin of sMenri Monastery.

Rinpoche’s early education came from his father, a well-known lama and the lineage holder of the Latri lineage, in the Kham region of eastern Tibet. Further education came from Tsultrim Nyima Rinpoche, the lama of Dorpatan Monastery in Nepal. Rinpoche later entered sMenri Monastery in Dolanji, India, the main monastery of Bön religion and education. There, he was taught by His Holiness Lungtok Tonpai Nyima Rinpoche, the 33rd sMenri Trizin (abbot); His Eminence Yongdzin Tenzin Namdak Rinpoche, the Lopon (head teacher) of all Bön education; and master Geshe Yungdrung Namgyal, a teacher of the Bön Dialectic School at Menri. At the request of His Holiness Menri Trizin, Rinpoche founded and is the President of the Bön Children’s Home in Dolanji, India, that provides housing, clothing, food and education for orphaned and underprivileged Bön children from northern India, Nepal, Bhutan and Sikkim. He is also the Vice-Chairman of the LAC for the Central School for Tibetans in Dolanji.

Rinpoche was the first Tibetan Bön monk to teach Bon in the United States. Rinpoche has adhered strictly to the authentic Yungdrung Bon texts and teachings as passed down for thousands of years. He is the author of Opening the Door to Bon, the premier guide to the Ngondro practices for Western students of Bon, as well as his second book, The Inner Mirror, about A-tri Dzogchen. Rinpoche has taught Bön teachings in the U.S., Europe and Asia since 1989. Rinpoche is an immensely respected monk and teacher throughout the world for his authoritative, compassionate, and engaging teaching of Bön, and his ceaseless service to Bön.

He is the founder and Spiritual Director of Yeru Bön Center (headquartered in Minneapolis, with a branch in Los Angeles); Shen Chen Ling Bon Center in Minsk (Belarus); Sharza Ling Institute in Poland (with headquarters in Poznan and a retreat center in Pyszki, Poland); the Bön Shen Ling Center in Moscow; the Bön Shen Drup De Center in Kharkow, Ukraine; and Yeru Canada. Rinpoche is currently supervising a stupa construction project for world peace at the Kungdrol Ling Retreat Center in Thailand.