Becoming One with the Rice

Let me take a moment to welcome Tempa Dukte Lama to Minneapolis and Yeru Bön Center. It was wonderful having him tonight.

Tempa Lama began the evening with a genuine and insightful overview of his other earlier books, Journey Into Buddhahood, The Intimate Mind, and Inexhaustible Miracles, while taking time to expand on specific ideas relating to openness, generosity and compassion. He also spoke of his early life in Nepal, in Catholic school, in Bön monastery, then later moving to the United States and spending time in a Zen monastery in Santa Fe before finally founding his Bön Center, Olmo Ling, in Pennsylvania.

Tempa Lama followed the beautiful teaching on generosity with a short meditation practice. He gave each of us a grain of rice and told us to concentrate on the rice for five minutes. All our attention was to be on the rice until we became one with it in our minds.

Personally, I was able to concentrate for much of the time, but not perfectly. My mind wandered a few times before I re-focused. After mentioning this to Tempa Lama, he said something that struck me:

How can we be truly free if we don’t have control of (or understanding of) our own minds?

As with other open-eyed concentration meditation exercises, I (and others) experienced subtle visual distortions while staring at the grain of rice. Sometimes the rice seemed to be floating above the surface it was on, or moving slightly. Sometimes tunnel vision caused the periphery to become blurry. This, Tempa Lama later explained, was due to the constant motion within us. We’re constantly moving throughout the day. Our eyes continually dart this way and that. Even our blood never stops pumping. So when we finally sit still, this change, along with the continual inner motions are a cause for these and other phenomena that arise during this type of concentration meditation. I could say more, but I’m certain I wouldn’t do his explanation justice.

Tempa Lama ended the day with a beautiful description of visualizations to be done while performing prostrations, a form of contemplative meditation, distinct from our concentration meditation earlier.

We’re so happy that Tempa Lama is joining us here in Minneapolis and we’re so grateful that he will be giving the Heartdrop of the Loving Mother teaching this weekend. We hope you can make it. Click here for details.

Yeru is happy to announce that the Ngondro Online Course is open once again! The… 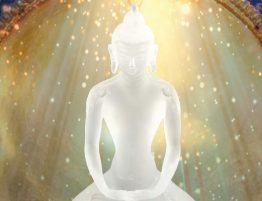 The Inner Mirror: A-tri Dzogchen Latri Nyima Dakpa Rinpoche and the board of Yeru Bön Center…

This past weekend, Yeru Bön Center was fortunate enough to host Geshe Nyima Kunchap, who…