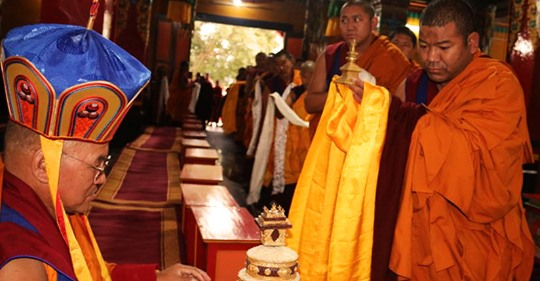 This enthronement was at the request of the villagers of Barale village, as well as the request of His Holiness the 34th sMenri Trizin and His Eminence sMenri Ponlob.

The occasion was held on an auspicious day of the Tibetan calendar. During the enthronement, snow fell at sMenri, a very unusual and auspicious event.

Khenpo Muri Geshe Hyima Kunchap Rinpoche was born in Tichu-rong, Dolpo, Nepal, once a providence of Zhang Zhung in 1964. His early education in Bon began at the age of 8 from his root lama His Eminence Bar Le Rinpoche. He came to sMenri Monastery in 1982 and received his the most prestigious doctorate degree of Geshe in 1994 by His Holiness the 33rd sMenri Trizin and His Eminence Yongzin Tenzin Namdak Rinpoche.

Yeru Bon Center feels a special connection with Khenpo La, as he was one of the monks David met on his first trip to sMenri in 1989.

We join with many others in wishing Khenpo Muri Geshe Nyima Kunchap Rinpoche the best of luck, many blessings, and good fortune in his new position. We are certain that the villagers of Barle, an anyone who has the good fortune to interact with Khenpo la, will be blessed and their life enriched.

His Eminence is supremely precious and special to the Bönpo. Watch the video as Rinpoche…